We be there at sundown, Shadows stretchin’ all around. Goldy-peach bleeds the sky, be aware that ye we spy?

Purple is the haze, green is the ring, Beware the goblin moon. It’s our time to sing!

That be us there- a chatter in the leaves, A tinkle in the stars, a giggle in the breeze. Eyes red as mars!

If Ye leave an off’ring, we’ll play, A real treat, If Ye give some milk, Ye’ll Find us real sweet.

Should ye leave us nothing, Act the mardy grump, Should ye shout and swear, Or threaten a thump,

If ye ignore our pranks, Or anger at our cause, We’ll scare ye o’ the dark, And lock all yer doors.

We’ll pull yer dogs ears, Stuff jam in yer x-box, We’ll crack all your plates, And wee in your veg-box.

Purple is the haze, green is the ring, Beware the goblin moon. It’s our time to sing!

We’ll be nice to ye, if ye be nice to us, If ye treat us kindly We’ll give no fuss.

Normally I’d post this in the ‘Synchronicity’ category, but because something happened this morning, its going straight into ‘Weirdry’.

Where to start? At the beginning….

It was the last week of August this year, on the Monday, in fact when I settled on the idea of performing the Bardic ‘Fire Weaving Ritual’ on the last day of August, Saturday the 31st.  So I asked the Druid Plant Oracle if this would be an auspicious time to do so.  In short,  the reply was in the ‘yes’ category.  I try not to use yes and no questions with any oracle as the answer can be vague at best, or raising more questions at worst.
The next day, Tuesday, was Léithin Cluan ‘s leaving party.  Because its unlikely she’ll be joining us at Yule, she gave some of us our Yuletide gifts in advance (not everyone as she was collecting them throughout the year).  Mine was a small dragon statuette .  She’d named it ‘Alfred the Great’, I called him (of course it was a him) Bubba.  Bubba sits proudly in the fire section of my Altar at home:

Bubba the symbol of the Dragon Spirit.

So not only a gift from my friend, but a sign of the gods, a dragon symbol to say “Yes, perform the ritual”.

On the Saturday, on my way to the St. Anne’s allotments to perform the ritual, I went through the Arboretum and found this image: 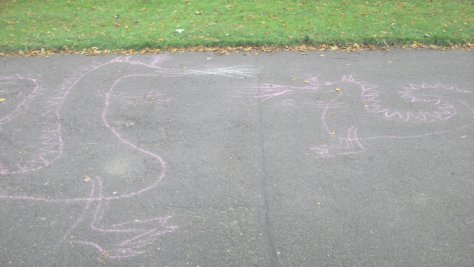 Two more dragon’s, technically they are fire-breathing wyverns (Wyverns are two-legged, dragons are four).  Another sign.  The ritual went fine and dandy, I just found it strange the spirit of the Dragon made itself known.  I’ve never worked with it before or called upon in, but somehow the Bardic fire course has opened up that communication… something I had to use this morning.

My wife, who shall now be known as Pipes on this blog (as in nice set of… she’s a singer y’see.) Went out last night for an open mic acoustic night.  Around midnight she called to say she was going jamming and let me know when she’s on her way home.  Fair enough, and I go to sleep.
I then wake up at 4am and there’s no sign of her there.  I look down stairs, no one around… so my mind starts playing tricks.  I get my phone, no sign, so I call and leave a message of the “Where the fuck are you?” Kind.  I leave a text, give it a few mins (OK, 30 seconds) and call ten more times.  No answer.  I start thinking the worst… getting a grip I get my oracle and ask where my wife is.  Not expecting an exact answer, just a clue.  I didn’t understand it (at that time in a morning, who would?) So I break my rule and ask a yes or no question: Is she safe? Two cards pop out, both talking about creative endeavours and pursuing her calling.
Aha! So she’s OK and still making music? I feel a bit better but I still need to know.  So I called on the dragon.
I lit my Altar candle and breathed in and out deeply three times and invoked the fire as I often do, then stared directly into the flame and said:

I let my nervous energy be the fuel for the connection with the spirit.  I paid in advance with an offering of tobacco and blew out the candle flame.  Looking at the time it was 04:30.  I get a text message from Pipes at 04:43. It worked! OK, it was a text, not a call but it was still contact.  Pipes was fine (drunk and stoned) and still jamming.  Apologising for worrying me, she was now getting a taxi.  She did get home and she was alright (a little drunk and high).  Thank fuck!

I get the idea it worked because my instinct of protection was what linked me and the dragon together.  That and Pipes works with the dragon anyway, which was why I called it.

I won’t use the dragon every time because I don’t think it will warrant it.  But the need and cause must be great to get its attention… at least that’s what I think right now.

All together now:  “Anaal Nathrack…”

A blog about Druidry and Weirdry